Food for all, not for profit: the quest for food sovereignty

This article has been published first on contributoria.com

Most of us buy our food in supermarkets: Tesco, Sainsbury’s, ASDA and Morrisons control 75% of the grocery market in the UK. Spanish tomatoes and peppers come wrapped in plastic, so do green beans and fresh herbs from Kenya. Whether we want lemongrass, sushi or Indian curry sauces, it is all offered to us on those familiar shelves.

In short, we consume food without thinking of it much – unless we need to calculate prices and cannot even afford fresh vegetables. The food industry is simply another industry that keeps our 21st century lives rolling on with the freedom of choice and consumption we have grown to appreciate.

Occasionally, rising food prices that lead to increasing hunger make the news; somewhere in the distance, we know rainforests are chopped down to make space for big monoculture farms.

The principles of food sovereignty

But could there be another approach to food? The growing food sovereignty movement argues yes.

Food sovereignty is defined by the peasants’ movement La Via Campesina as “the right of peoples to healthy and culturally appropriate food produced through ecologically sustainable methods, and their right to define their own food and agriculture systems.”

The six pillars of food sovereignty are: focusing on food for people instead of seeing food as a commodity; valuing food providers; localising food systems; putting control over land, grazing, water, seeds and fish populations locally; building on local knowledge and skills; and working with nature.

A key part of working with nature is using agroecology, a way of farming that uses contributions from nature and low external inputs. Agroecological methods improve resilience and adaptation, important in the face of climate change. They provide better yields, too: a study that covered 37m hectares in 57 countries in the global south found that yields increased by 79% compared to conventional methods of food production. Organically farmed lands also have massive potential for capturing carbon and slowing down climate change.

Via Campesina is one of the largest social movements in the world, representing 200m farmers from 70 countries. It came together some 20 years ago when peasant farmers, fisherfolk and landless workers and indigenous peoples felt their lands and livelihoods were under threat and organised for resistance.

The need for small-scale farmers to protect their livelihoods becomes clear when looking at the developments in the food industry. The corporate food regime is controlled by a handful of big corporations. While land grabs are nothing new in human history, recent years have seen an acceleration of appropriating land for biofuels as well as traditional crops. Land grabbing is often accompanied by violence.

It is not only about land, either. As John Hilary, director of the NGO War on Want writes in his recent book The Poverty of Capitalism: “Industrial agriculture has created a complex system of interlocking oligopolies that spans seeds, agrochemicals, biotechnology, trading, retailing and consumer goods companies.” Hilary goes on to explain that between them, just three companies – Monsanto, DuPont and Syngenta – control more than half of the world’s entire commercial seed market. Syngenta is also the world’s largest agrochemical company with a market share of nearly 20% and the other two rank in the top 10 for agrochemicals, too. They also enjoy a significant market share in the biotechnology industry. The picture is not very different when it comes to food processing: the 10 largest companies control 28% of the world market, with the familiar Nestlé by far the largest.

“This intensity of market concentration means that a group of no more than 40 transnational corporations effectively control the global food regime from farm to fork, and have amassed spectacular profits as a result of their market domination”, Hilary writes.

The damaging impact of the uneven market becomes clear also when talking to food growers in London.

Rob Ronan from Community Food Growers’ Network (CFGN) tells me there are community gardens all over the UK and the food they produce could meet dietary requirements. But monopolies make it increasingly difficult for small-scale farmers to compete. “Small-scale agriculture is highly effective, more effective than monoculture and GM”, he tells me. 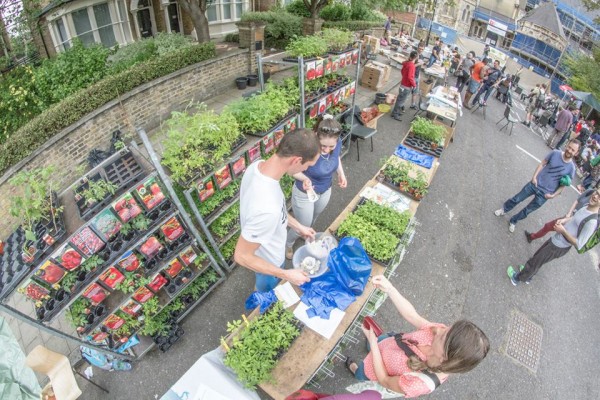 The efficiency of small-scale food production in the UK has been documented by the Ecological Land Co-operative in a study titled Small is Successful. Covering eight case studies of livelihoods of 10 acres or less around the UK, it shows that “farming on a smaller scale is more productive per acre in terms of yield, profit and other social and environmental benefits , including biodiversity”. The assertion that farms need to be large is challenged not only by an increasing focus on sustainability, driven by the imperatives of climate change, peak energy and food security, but also by the observation that “there are a growing number of successful land based enterprises operating throughout the UK on small acreages”.

Yet these successes are often not recognised. Also, “red tape” and planning policy are great obstacles to small-scale farming, as are high property prices: “Where growers and farmers can purchase land at or near agricultural land prices, low acreage livelihoods offer affordable opportunities to enter farming. High property prices remain the single greatest barrier to new entrants to small-scale farming”, the study explains.

Ronan also points to the methods utilised by agribusiness and the seed industry, when I ask him what is wrong with our current food regime – the use of pesticides is common and damages soil, wildlife and people who eat the food. Long-distance travel also adds to the environmental impact. The WHO estimates that pesticides kill 355,000 people a year, mostly in the global south.

“Agribusiness holds a lot of power over our food systems. By building the local food systems we want to see and by challenging wider political processes that support agribusiness, we are empowering new ways to meet our food-needs”, Ronan says. In addition to the exploitation of land, he sees the exploitation of labour as a big problem. “We also want to create fair livelihoods for people who work. We demand that food systems are community built and benefit the community.” CFGN is a network of organic community gardens across London. It supports projects in practical terms, such as sharing resources, but also provides a space for inspiration and an opportunity to connect with other food-growing communities. “We come together to organise collectively on issues such as access to land, seeds and water”, Ronan says.

The network is also part of Food sovereignty now!, a UK umbrella organisation that was launched in 2012 and is planning another meeting in the summer of 2015. “It is a very exciting process”, Ronan adds.

THFGN organises seasonal gatherings, workshops and training for organic farming, as well as a seed library. The events move in the borough so that everyone has access, although participation is not limited to east Londoners: “A lot of people also come from other boroughs because this network is great”, Hunter says. “There are often 100 people at events, there are workshops and stalls where different community gardens can sell their products.”

Recently, WEN was commissioned by Tower Hamlets Public Health to set up 15 new community gardens in the borough, as the council recognises their health benefits. They work with housing associations and the community aspect is very important: “It really brings people together. There is a big Bangladeshi population in Tower Hamlets and we get a lot of Bangladeshi women here who really enjoy the social interaction”, explains Hunter.

She tells me of her visit to a housing estate the previous day, where a resident of Bangladeshi origin had proudly showed her the harvest of their community garden: kodu, doogie, Chinese pumpkin and aubergines. Hunter says many of the residents bring seeds back from Bangladesh. Growing their own food is a significant reduction to the residents’ food bill, especially when it comes to vegetables that would otherwise need to be imported. Now they are organic and, of course, come without the food miles too.

Hunter recognises that despite the potential, currently growing food in London is more of a hobby: “There is a lot of demand and people will be interested in doing it on a larger scale, but to do it you need policy change. Any planning needs to have food production incorporated into it.”

Land is a key issue in the global north too.

Political changes and “propaganda by pumpkin”

London may be an extreme example, but with nearly 80% of the UK population living in urban areas, growing food in cities is key for food sovereignty on the densely populated island. 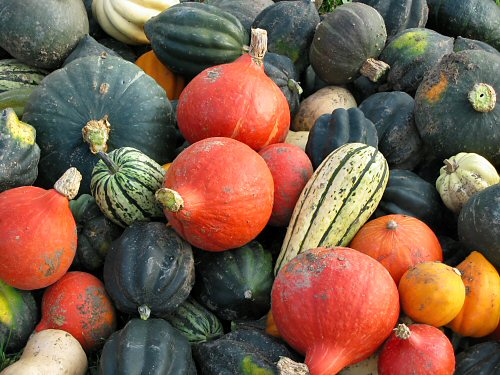 Looking around the world shows what is possible: when the Cuban economy collapsed in the early 90s, people started growing their own vegetables anywhere they could, using small vacant lots, patios and balconies. Now urban gardens provide 50% of the vegetables needed for the 2.2m population of the capital, Havana, according to the 2012 briefing Food sovereignty by the NGO World Development Movement (WDM).

In Venezuela, the government has done a lot to encourage food sovereignty. Since 1998, the country has moved away from multinational corporations for food production and distribution. It has increased overall food production by a quarter and become self-sufficient in two important crops: maize and rice.

Giving small-scale farming a chance thus seems to require political changes. Land ownership and government support are among the most important ones.

Ronan sees a two-sided approach to making food sovereignty possible in the UK. “Firstly, it is difficult for small-scale farmers to compete; large-scale agriculture receives funding from DEFRA, the government body. So we need to organise collectively and lobby in order to survive and create livelihoods from small-scale agriculture.”

WDM also calls for political changes to achieve food sovereignty in Europe. Developing local infrastructure is needed, as is land reform that protects small-scale producers. Global trade policy has to be transformed, too. Currently, the UK food system relies on cheap imports, whereas many poor countries are locked into a production structure that relies on cash crops for export.

Ronan’s second point is more hands-on: “We need to implement local food systems in practice. We are doing it by providing knowledge and education, and what we call ‘propaganda by pumpkin’: creating community food garden projects that meet food needs of communities”, he explains. Key for building local food systems is to support each other and share resources. 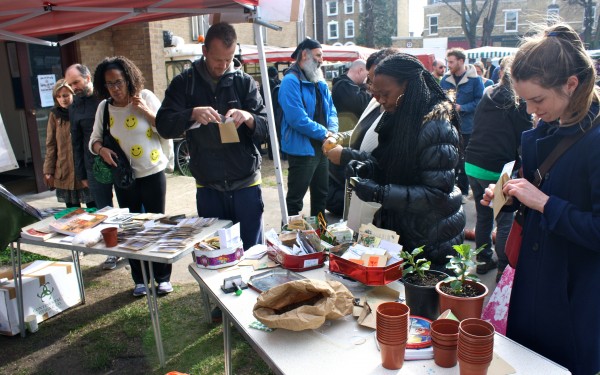 Propaganda by pumpkin works. When I look at these healthy vegetables growing in London boroughs, I find myself never wanting to buy Central American bananas in a plastic bag again. I ask Ronan how to get involved and he says, “community food projects are everywhere; it’s just about finding them”. That really seems to be the case.