Why Food Sovereignty is also about the Sovereign Soil

When we, as Earth’s inhabitants, gain a clear understanding of the roots of Food Sovereignty and its role in bringing freedom from systems of food oppression to cultivators of the Global South, we will stand a greater chance of also understanding how well aligned it is with the call for all of humankind to take better care of the fragile skin that adorns the planet: this skin is called the soil.

Food Sovereignty exists as a statement of clearly articulated rights in the face of economic and political and cultural oppression and it militates against the structures – legal, political and economic – that arose out of colonisation, slavery and ‘entrepreneurial’ adventurism in the Global South, chiefly undertaken by men of means from the Global North.

It does not remain a Southern phenomenon, however, as the systems of resource or ‘capital’ control, developed out of these oppressions, have found themselves repeated in every act of enclosure of the commons and the labour of the common people. They manifest themselves in industrialised and exploitative forms of production, witnessed globally: North and South.

Food, then, becomes a totemic symbol of an act of resistance that implicates all of us, because we all eat food.

Soil, as the main substrate in which food is grown, might be seen as a key stakeholder, a foundational actor, a fundamental base and key variable in food sovereignty. This is especially the case for indigenous cultures which interface with the land in multi-dimensional ways and which confer on aspects of the land, such as the soil, rivers and mountains, personalities, which demand respect and consideration. 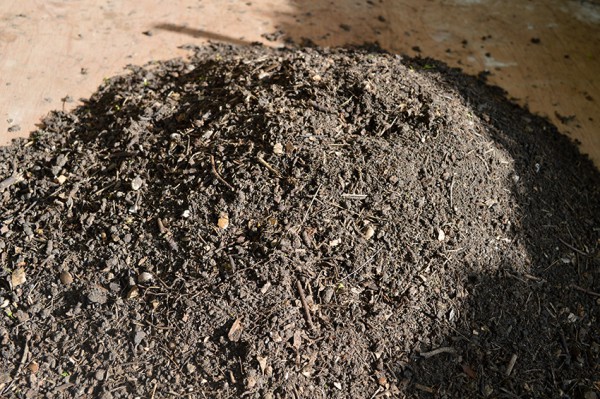 The Nyoongar, of the Perth region of Australia, for example, rubbed soil into their armpits so that it would take on their smell. The soil was then released back to the land.  This told the ancestral spirits about the person asking for the protection while travelling on the land.1

Other indigenous cultures observe soil-based rituals in recognition of its vital nature, which is regarded as transformative: the active womb of the earth, a portal for ancestral spirits.

We bury our nearest and dearest, upon transition from life, into the soil. We have done so for centuries, back to the first peoples. We also plant our seed in the same act of reverence and hope for rebirth.

From the soil emerges the life that we all depend upon. For this reason food sovereignty has a direct relationship with an empowered and empowering engagement with the soil. The right to interact with the land and soil in ways that respect it, in deep concordance with the time honoured ways of grower communities and families. 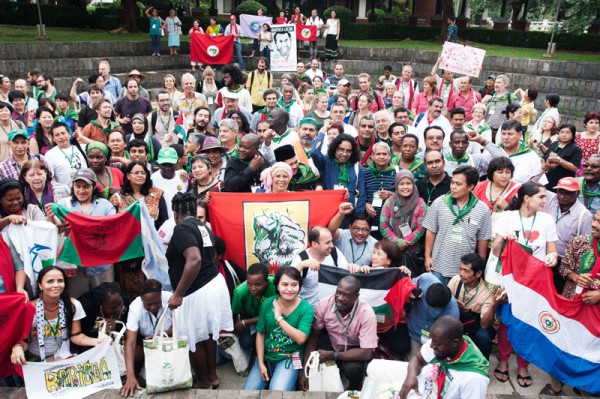 La Via Campesina, an international movement of small-scale farmers, dependent upon their production systems for their livelihoods, speaks of food sovereignty, in context, as an act of resistance:

‘The principle of food sovereignty promotes the development of alternative production, distribution and consumption models based on a new logic, far removed from that of neo-liberalism which has always given the central role to markets and trade liberalisation, and which considers that only international markets can solve the problem of food insecurity.’

Food Sovereignty, as a term, has been adopted and adapted by many actors to suit their own circumstances, as indeed has been advocated by the architects of it to date, but the essential meaning expressed at the Nyéléni 2007 Forum for Food Sovereignty is about:

“PEOPLES’ food sovereignty which is to be defined by social movements. It is a “vehicle”, a carrier, for our collective political project and our joint strategies and actions regarding food production and consumption at all levels.”

The statement below from Nyéléni has been distilled into seven pillars which are captured below it:

“Food sovereignty is the right of peoples to healthy and culturally appropriate food produced through ecologically sound and sustainable methods, and their right to define their own food and agriculture systems. It puts the aspirations and needs of those who produce, distribute and consume food at the heart of food systems and policies rather than the demands of markets and corporations. It defends the interests and inclusion of the next generation. It offers a strategy to resist and dismantle the current corporate trade and food regime, and directions for food, farming, pastoral and fisheries systems determined by local producers and users.

Food sovereignty prioritises local and national economies and markets and empowers peasant and family farmer-driven agriculture, artisanal – fishing, pastoralist-led grazing, and food production, distribution and consumption based on environmental, social and economic sustainability. Food sovereignty promotes transparent trade that guarantees just incomes to all peoples as well as the rights of consumers to control their food and nutrition. It ensures that the rights to use and manage lands, territories, waters, seeds, livestock and biodiversity are in the hands of those of us who produce food. Food sovereignty implies new social relations free of oppression and inequality between men and women, peoples, racial groups, social and economic classes and generations.

In Nyéléni, through numerous debates and interactions, we are deepening our collective understanding of food sovereignty and learning about the realities of the struggles of our respective movements to retain autonomy and regain our powers. We now understand better the tools we need to build our movement and advance our collective vision.”

Food Sovereignty thus highlights the extent of the damage that the industrial, transnational systems of food production distribution and consumption have meted out on the global South’s food systems. It does not stop there but continues to inflict what can only be called punishment on all the indigenous farming systems of the world that hitherto existed. These are ones which have sought to use mindful and traditional practices for land and soil management and more natural systems of working with the land, including all those practices described under the banner of agroecology.

One instrument of these ‘industrialising’ oppressions was, and remains, the imposition on entire cultures and environments of machine based and technophilic ‘solutions’ of industrial agriculture. These involve large scale cultivation of the land in the pursuit of financial profit alone, for the privileged few, yet with the stated objective of ‘feeding the world’ and contributing to its ‘food security’.

I say cultivation, but to cultivate something does not involve imposing upon it practices which cause it to become denuded of its nutrient base; exposed to the unforgiving elements and transformed into a mere substrate upon which to act out vainglorious actualisation of laboratory driven and finance focussed projects and programmes, does it?

This is especially the case when such projects do not actually nurture or feed the populations who formerly had full access to the land, and who are now rendered landless and unemployed. Those who are now bereft of the land upon which their entire culture was based are, in this manner, denuded of so much more, in so many other, tangible, but also less easily measurable ways.

This is where we begin to understand that soil is a fundamental variable in bringing land – and people – into optimal production, reproduction and relationship, not only of goods, but also of life itself.

Land is productive, not only when it yields a fantastic number of kilos of product per hectare but also when it supports a rich and varied array of life, human and non-human; when it is referenced in the development of abundant cultural forms and when it is enabled to interface with other land-dependent, natural assets in ways that continue to replenish it and keep it in a mode of resilience, secure for future generations and for reuse by the present generation.

Soil, the chief asset of the land which life requires in order for continuity, is not only a site of production but also one of reproduction. It enables the rich interplay of micro to macro organisms including humankind. It is the cultural base of our identities, and the material base of many of our arts and sciences. Without it we are nothing but fragile sentience upon the earth.

If land is our Father, then Earth, as soil, is our mother, whose womb we currently desecrate in search of supremacy of a most volatile kind: a separated existence as paper gods of a concrete earth.

Our connection with real food is predicated upon a reliance upon and the existence of real soil and the real agroecologically sound methods of cultivating this soil. This is so that it may be sustainably and reliably the source of our future realities upon the planet.

As it is said by our ancients: As above, so below. The very reason for the existence of calls for food sovereignty from the Global South must not be lost in the current clamouring for food growing rights in the Global North. These two ‘offspring’ are umbilically connected to the one Earth upon which we all stand. The basis for nutrition of the one is the same as for the other. The soil of each land must remain a sovereign asset, the knowledge of which is understood and shared within community and in so doing becomes located in the knowledge base of each community member and within each of the indigenous groups who have had longest association with that land and soil. It must be taught and learned by the ensuing generations.

This is a right that must be respected, as must the ability of people to secure their rights of soil stewardship through sound, agroecological practice which make sense of the delicately balanced relationship of animal, plant and soil.

The dance of life within traditional or innovative, but necessarily sound, growing systems is based upon a song, a call, or even a symphony of sovereignty that all who have ears must hear, if listening is what we are called upon to do, for our common survival.