The Zapatista Army of National Liberation (EZLN) launched the campaign, Against the Walls of Capital, earlier this year. The group, whose coffee we sell at Organiclea to support their liberation struggle, called on supporters all over the world to “organize with autonomy, to resist and to rebel against persecutions, arrests and deportations” because “every human being has the right to a free and dignified existence in the place that seems best to them, and they have the right to fight to remain there.”  The Zapatistas’ call was made in response to Trump’s proposal for a massive border wall with Mexico, but their campaign expands far beyond the borders of the USA.  Walls – physical, legal and psychological – are being erected all over the UK, Europe and beyond.

The Zapatistas further go on to call for “support in and with activities of those who resist and rebel against expulsions. Whether they are supporting them to return to their homes, creating ‘sanctuaries’ or supporting existing ones, with legal advice and support, with money, with the arts and sciences, festivals and mobilizations, commercial and media boycotts, be it in cyber space, wherever and however it may be. In all the spaces where we move it is our duty to support and show solidarity.”

As set out in the Community Food Growers Network manifesto, we believe in community development and social cohesion, in creating vibrant spaces for diverse individuals and communities to meet on a level playing field with the common goal of food. Many projects explicitly state on their websites that they aim to create inclusive spaces, to work with all sections of our communities and to foster solidarity and co-operation.  In a society where the political establishment is bent on creating a ‘hostile environment’ for migrants, this radical inclusivity in itself can be a powerful form of solidarity.  Not only do we welcome all people in our community, but we particularly value marginalised people. As noted on the May Project Gardens website, sustainable and ethical solutions can only come from drawing on and working with the marginal – both in terms of people and places.  Right now migrants, and particularly those without secure immigration status, are amongst the most marginalised groups in society.

Organiclea has supported migrants to volunteer with us, and a member of the co-op has supported applications for secure status to remain. This was important to us as a workers’ co-op, because we believe in social justice and are opposed to discrimination of all kinds.  We apply the same principles in our interactions with people as when we are tending the land.  In people as in plants, we know everything has value and we celebrate diversity. And just as in nature everything is interconnected, we believe that in the human community, a strong web of connections and relationships between all peoples is what keeps the system healthy and balanced. By building this kind of non-hierarchical community of self-reliance, we reduce dependence on exploitative structures and develop a secure base from which to challenge oppression and injustice.

There are many migrants in London and the UK living precariously, both in terms of poverty and immigration status, and community projects have been set up all over to address this need. But it’s still not enough. One such example from the growing movement is the Mulberry Tree Community Garden, a Quaker project in Tottenham, which specifically welcomes migrants. Such projects promote community harmony and can be a safe space away from the hostile spaces enforced by the State.

As community food projects we are committed to promoting and implementing food sovereignty. Food sovereignty is a political concept: it is about taking back control of our food system at every level. The concept was put forward by La Via Campesina and small food producers largely in the Global South. Globally, small food producers are marginalised and exploited. Both in the UK and abroad, migrants working in agriculture, food processing and catering experience out of control levels of exploitation. The food sector is well-known for its use of slaves, and this is a problem in the UK not just abroad. This is the human price of cheap food sold in supermarkets. 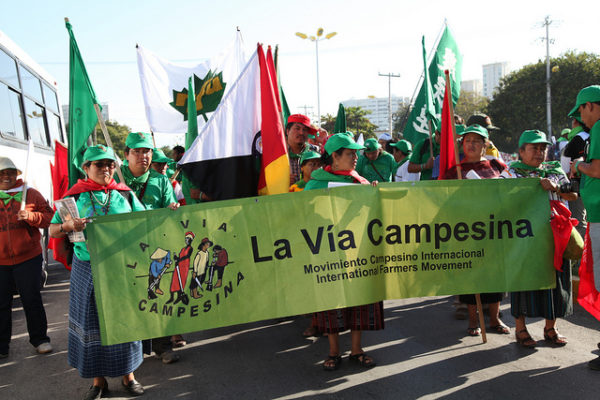 La Via Campesina (LVC) has written numerous solidarity statements with migrants and the European Coordination of LVC  has said:  “We would like to denounce the current cruel European migration policies, as well as all measures put in place to prevent or to complicate the free access to Europe… we want to remind that once more civil society as well as peasants have reacted faster and much better than most of our governments. With our commitment and solidarity we aim to build a Europe where human beings are more important than neo-liberal economic interests.”

We are united in our struggle against neoliberal policies that fix the food system and keep people off the land, permanently impoverishing us as food producers and consumers.  We are also united by common humanity. Another statement from the African Region of LVC states: “We farmers, we, who live permanently impoverished, in conflict-ridden areas and under threat by armed groups, We, who are unemployed and desperate, We, who leave our land and our families, we who face all possible risks including death because we are left with no other choice than to believe that El Dorado can be found on the other side of the Mediterranean. We have no need for your increasingly repressive, inhumane and humiliating measures when reaching your borders. We do not need you to increase your budget to better turn us back, to detain us in your detention centers, to criminalize us… What we need is for you to let us improve our lives in the context of food sovereignty.”

Commitment to food sovereignty implies supporting people in their struggle to live a decent, autonomous life in spite of the humiliations imposed by neoliberalism.  And we provide this support in the context of our work, in the gardens and in all our interactions with migrants.

It was affirmed at the most recent CFGN gathering at Grow Heathrow that we want to maintain our radical edge and participate in direct action – where there is capacity and on issues relevant to our work. This could include issuing solidarity statements of our own.

There is little reporting in the mainstream media on the injustices faced by migrants – or worse – where migrants are discussed, they can actually be demonised. By issuing a solidarity statement we can help make visible some of the ‘invisible’ injustices faced by the migrant community, and be a voice for our comrades in LVC at the London level.