Londoners’ own plan for London

See pp 48 – 51 for policy proposals on ‘Community Food and Food Production’ that CFGN has worked with Sustain, Women’s Environmental Network and the Federation of City Farms and Gardens on.

Just Space, an informal network of voluntary and community groups, has published a draft Community-led Plan for London to establish the need for public participation and new initiatives in planning the city. 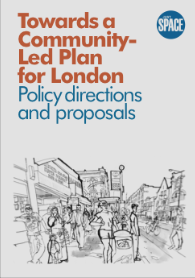 Frustrated by the few gains resulting from community participation in successive Examinations in Public (EiPs) of the London Plan, and at too late a stage in the process, Just Space decided to use its combined knowledge and evidence built up over many years and write a set of London Plan policies from a community perspective. Eighty-five different organizations have contributed to the draft, from local community campaigns to pan-London interest groups.

Just Space calls for the new Mayor to analyse the current planning model and its detrimental impact on the majority of Londoners. They say there is an urgent need to re-balance a system in which developer-led planning dominates large areas of the city, for example across the ‘Opportunity Areas’. Just Space challenged Boris Johnson’s London Plan, saying it would increase the polarisation of London’s communities, continue to encourage inequality and not solve the housing crisis. They were also critical of the narrowness of his ‘World City’ focus.

Richard Lee, Just Space co-ordinator, said:
“Londoners need to be involved in strategic thinking about what kind of a city we want to live in and how policy can reflect that, rather than being just ‘end users’ of the planning system. We have a wealth of knowledge to bring to the table and are looking to Mayor Khan and his team to open the door at this formative stage.

“Our view is that people are alarmed at the social and economic impact of recent development and that as a result different planning priorities need to be established. Our policies focus on London’s well-being, for example through a more localized, fair and green economy; the refurbishment of existing homes; functional blue and green spaces; the importance of social infrastructure and community assets. The proposals come about through ground-level knowledge and the principle that London should be a city for all.”