Small-scale producers are feeding the future 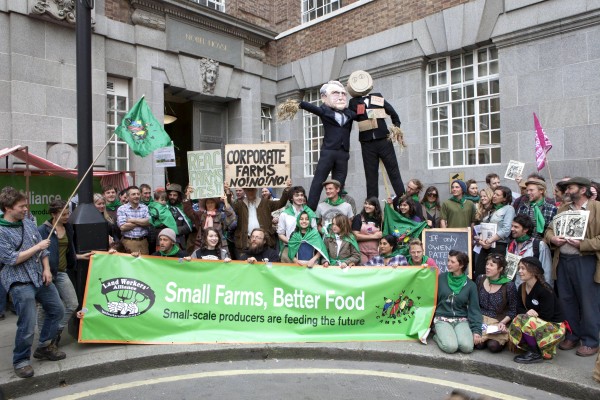 Yesterday (April 17th) 100 farmers and growers from the Landworkers’ Alliance travelled to London from around the country to protest outside the head offices of DEFRA and the National Farmers Union.

Under the leadership of Owen Patterson over the past two years DEFRA has strengthened its support of large-scale industrial agriculture and marginalized smaller producers, while the NFU has consistently lobbied for the interests of agribusiness and ignored the views of smaller farmers.

The land workers’ Alliance want to see small-scale producers put at the heart of decision making in agricultural policy.

“DEFRA needs to recognise the role of small-scale producers in contributing to the national food economy, as well as the environmental and social services provided by these producers,” says Ed Hamer from the LWA.  “As a matter of urgency we demand that DEFRA create policies conducive to a sustainable food future for all.”

The demonstration took place in solidarity with the April 17th – The International Day of Peasant Struggles. A global day of action called by La Via Campesina, the international union of peasant farmers which has over 200 million members worldwide. 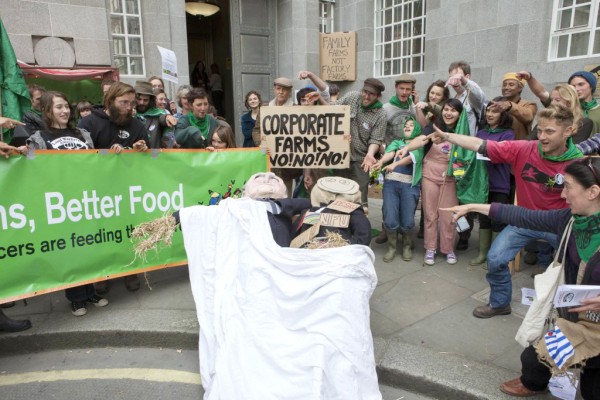 (Above) The Landworkers’ Alliance catch Owen Patterson in bed with agribusiness.